Physician Executives: Are You Utilizing Their Talent?

“This article originally appeared on www.stout.com.”

It is vital to anticipate how revenue cycle reports will be viewed across the organization.

If you are a hospital or health system with disengaged physicians, you are missing the boat (and probably bumping along, operationally and financially). Sound physician executive leadership empowers health systems to deploy curative operational solutions, offers providers input and a stake, and engages the physicians as valued partners versus cogs in the machine.

We recently performed a health system operational turnaround where the system was significantly subsidizing their employed physician network (e.g. losing money per physician). An undergirding issue (among many) was the lack of physician input into the organization. This reality left physicians fragmented, unappreciated, and undervalued. While there existed no discernable ill-will or animus, the physicians simply were not engaged nor asked to provide their input and insight. This chasm lent to chaotic differentiation from clinic to clinic amongst the system’s 16 clinic locations.

As a component of the overall structural rebuild we were engaged to perform, an immediate need was the creation of a physician advisory committee (PAC). As will be discussed, the implementation of a PAC had a direct impact on the health system’s revenue cycle. Within one year, system subsidies were reduced by 75% helping the system claw back toward profitability.

In the instant situation, the health system was hemorrhaging cash. An operational assessment was performed on each clinic site. As part of the post-assessment implementation and rebuild, a PAC was created. Our team suggested that, out of the gate (and at least as a Band Aid) the system define and immediately select, even if temporarily, physicians who exhibited tendencies toward engagement. The key was identifying physicians engaged in affecting change but who, to this point, had not been asked to. (While building the PAC quickly is not ideal, this build drove the hospital system to immediately draw from the talented physicians who sought to make a difference).

Standards, rules, and measures were delineated vis-à-vis tenure, mission, duties, etc. Each physician on the committee was known to be an “invested” partner who, to this point, had had no voice.

In the newly born committee, the physicians:

While many of these items can be tackled by the C-suite, the reality is that most folks in the administrative offices don’t practice medicine and it is certainly easier to hear a message from a peer who lives the life you lead versus one who has not walked in your shoes.

Whether a network is large or small, some form of physician committee is advised and models are malleable and scalable; there is no one right answer. Two rudimentary (and simple) examples follow. 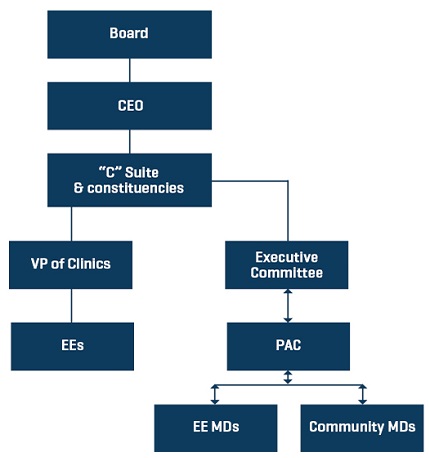 In a small system, as with the client referenced earlier (75 physicians), the PAC should have a limited number of participants (prorata specialty representation) and a well-defined scope of authority. In this case, the PAC might be constructed of 6 physicians of differing specialties. (In our turnaround situation, due to the urgency of time, the PAC was entirely staffed by internal medicine physicians and the size of the system and specialty medical staff rendered that sound, at least in the emergent near-term).

The PAC receives input and provides feedback to the employed physicians. And, if this is a clinically integrated model (CIM) with outside community physicians involved, they may be included to provide a consultative input role that offers thoughts apropos of care and quality (e.g. population health initiatives, etc.). The PAC then provides input to some sort of nimble (e.g. “small” in size) Executive Committee which may include representation from the PAC, the CEO, COO, CMO, CTO, etc., to work on and resolve the issues.

The feedback then flows back through to clinicians via the PAC. 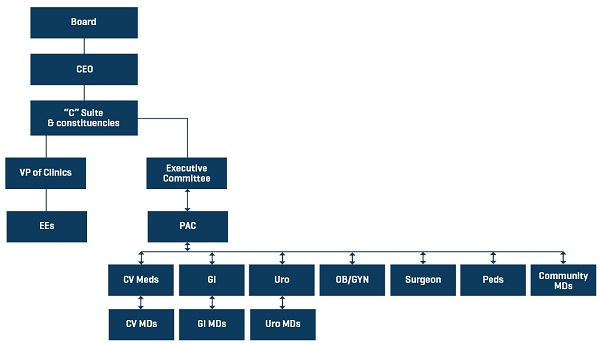 In a larger health/hospital system, the PAC might have an expanded multi-specialty representation and may be larger in membership/construct. The system may have one physician representing each specialty who serves as a conduit for his or her specialty constituency. For instance, a system might have a cardiologist who is the lead for the other cardiologists to ensure that their specialty-specific needs are addressed. The cardiology lead might then serve on the PAC or report up the concerns of the “cardiology section.” These issues would then be addressed by the PAC. (Remember, this construct does not limit or hinder provider access to the administrative offices and/or the CEO. It simply provides a structured method to obtain and deploy input from clinicians.)

Ideally, representation as either the “section lead” or on the PAC should be voted on by peers. This engenders greater support and commitment from other physicians. That said, the “section lead” should be a leader, not an antagonist. A representative with an axe to grind for some 10-year-old grievance (real or imagined) does no service to the organization and is counterproductive. Only honest brokers out for the betterment of the organization and their constituents need apply.

This model is scalable based on the number of constituencies. As with the small group model, a well-defined scope of authority should be deployed. In this case, the PAC might be constructed of physicians of differing specialties due to the diversity of specialization/sub-specialization within the system. The PAC receives input and provides feedback to the employed physicians. And, as with the small system model, if this is a clinically integrated model (CIM) with outside community physicians involved, they may be included to provide a consultative input role that offers thoughts on care, quality, and continuity of care (e.g. population health initiatives, etc.) throughout the community.

Will creation of a PAC cure all of a health system’s financial and operational woes? Certainly not. But your valued partners can go a long way to flattening the curve and remedying structural deficiencies.

* To read more about Stout’s experience and how we provided a 15 to 1 return on a client’s initial investment by helping them improve on their revenuecycle, download our case study now.

Read other posts by Jeff: